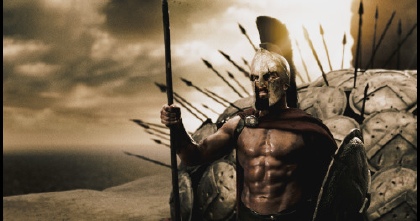 [This review contains spoilers, at least for those that have not read Miller’s 300 or are completely unfamiliar with the Battle of Thermopylae. Tread lightly in reading it if you wish to remain in suspense. -ed.] One of the criticisms that has been leveled against 300 is that it is “pro-war”, a critique shared by those on the left as well as those on the right, unfortunately. I am afraid that I must buck the trend in reviews and call these reviewers out on this point: 300 is in no way “pro-war”; rather, it is manifestly pro-soldier and pro-sacrifice, a great distinction indeed. It is easy to see how some might come to think of the piece as such – the warrior ethos held to by the Spartans, the achingly-operatic pace of the battle scenes, the nigh-Marine-ish “Oooooah!” the Spartans use as a battle cry glorify a warrior culture and tradition. This, however, is a far cry from glorying in actual war. While the artists and director painted wonderful pictures in bleached sepia tones, Frank Miller’s original work (and therefore, the screenwriters’ work as well) paints the story in stark black and white terms. There are no shades of gray, no shadows for nuances to hide in. To give one’s life in the cause of freedom, to sacrifice your own betterment for the safety of others is held in highest regard.
This Spartan warrior culture is not without its evident downsides, however. The cruel examination newborn boys are subjected to is shown in a harsh light, as is the vicious and rigorous training that Spartan (citizen) males undertook from the age of 7. It is not a glorious system nor an easy one and, at least as the movie’s premise would have it, the irony of the system is that its demand for perfection produces not only the brave and noble Leonidas but also the misshapen and traitorous Ephialtes.
On to the movie itself.
Leaving the plot and ideological concerns aside for a moment, it must be said that the movie itself is visually arresting. The specials effects are exceedingly well done, striking just the right balance between a necessary realism and the conceits carried in the original comic bookgraphic novel. This point bears further consideration, as it forms the basis for the entire style of the movie. I was initially slightly put off by the “slow-quick-slow” camera speeds employed throughout the film, although used primarily in scenes of battle (see one of the many trailers for an idea of what I am talking about) until it occurred to me: what the audience experiences in 300 is a sort of meta-tweening with the panels of the comic book acting as the key frames. Each speed-up is essentially a real life concession to the comic book form – the film advances between comic book panels and slows down when each panel is reached in order to stamp the iconic imagery into the viewers’ minds. As I said, it’s distracting at first, but then your mind adjusts to the flow and it begins to make a good deal of cognitive sense.
The dialog itself is fairly corny, which is to be expected in a movie based on a comic book which in turn was based upon the words and deeds of the Spartans, a people with no tradition of song, poetry or art. In fact, many of the lines that should have had the most emotional impact were in fact ruined by the countless previews and trailers that ran on T.V. (“Madness!?! This! Is! Sparta!”, etc.). On a positive note, two of the key speeches of the film were left unmolested by traileritis: that given by Queen Gorgo (Leonidas’ wife) to the Council of Sparta and that given by Dilios to the assembled Greek army prior to the battle at Plataea.

Speaking of Dilios, he was portrayed by David Wenham, aka Faramir in Peter Jackson’s Lord of the Rings. As the overall narrator of the story, I felt that he did a great job at conveying the mythic aspect of the tale in both tone and tenor.
The rest of the cast was comprised of lesser-known actors with Gerard Butler taking the lead role of King Leonidas. While his Scottish brogue occasionally broke through and caused me to involuntarily think of Braveheart, his acting throughout was generally quite good, as were the rest of the cast. I suppose the single best thing to say about the entire cast is that none of them got in the way of the story, they delivered stilted dialog the best they could and they looked good in doing so. Just about the best one could hope for in a movie of this type, I suppose.
The special effects were incredible all around – the sight of Xerxes’ army arrayed before the pass at Thermopylae was truly impressive and almost worth the price of admission alone. The fight scenes were well-choreographed and visually arresting throughout. The sound was well done as well and the tone of the piece was well summed up by the soundtrack composed by Tyler Bates. For instance, the following clip “To Victory” opened and closed the movie. Give a listen to get a feel for the driving, Eastern-influenced score:

A remix of the song was played during the closing credits which were well worth sitting through. They were done in a style that could only be described as a “hyper-violent version of the closing credits to The Incredibles“: the entire story was re-conveyed through simplistic line drawings evoking a very comic book-ish feel.
Content-wise, the movie definitely deserved its ‘R’ rating. While the violence wasn’t quite as graphic as last year’s Sin City, it was over the top and plentiful. Additionally, there were four sex/sexually-charged scenes that pushed the limits a bit. Two felt exploitative (Leonidas at the Oracle and Ephialtes meeting Xerxes), one was rather violent (Gorgo and Theron) and one felt fairly invasive of an otherwise happily-married couple (Leonidas and Gorgo). Each scene, however, had a point and illustrated said points with the sexual imagery.
Ultimately, I believe this movie represents a return to an old form where the good guys were easily distinguishable from the bad and felt no compunction in standing up for what is good and right in this world. 300‘s full package makes it an easy recommendation for anyone over the age of 17 – here’s to hoping that the rest of Hollywood catches on to the wonders of positive storytelling.