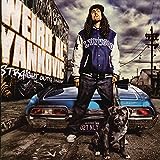 Album Title: Straight Outta Lynwood
Artist: “Weird Al” Yankovic
Year: 2006
I went out and snagged a copy of Weird Al’s latest album yesterday and, after giving it a few listens, I have to say that it’s one of his better albums, although by no means his best. I think it’s actually a bit more of an indictment of the state of popular music than one of Yankovic, as his parodies of Usher, R. Kelly and Taylor Hicks (“Confessions Part III”, “Trapped in the Drive-Thru” and “Do I Creep You Out”, respectively) just fall a little flat, particularly “Trapped in…” which clocks in at an almost unlistenable 11 minutes and ranks with “Albuquerque” and “Genius in France” on my “must skip” Weird Al track list.
The rest of the album is quite good, including the obligatory polka medley “Polkarama!”:

For those keeping track, that was:

…in that order.
The first single, “White & Nerdy” is quite good, although I think it is surpassed by two other tracks, original “pastiches” that lampoon/pay credit to bands’ entire catalogs. First up is “I’ll Sue Ya” which is a pretty good send-up of Rage:
[audio:04_I_ll_Sue_Ya.mp3]
Next is “Close But No Cigar” in which Al basically nails Cake’s entire catalog:
[audio:09_Close_But_No_Cigar.mp3]
The album is actually a “Dual Disc” which means that one side is a regular CD while the flip side is a DVD featuring a 5.1 mix of the album and videos for all 6 of the original songs on the album, all of which are animated and high-quality. There’s also a small featurette composed of footage from the studio sessions that went in to producing this album. Because of the Dual Disc nature of the album, it is actually thicker than a regular CD or DVD which presents no problems for PC CD-ROM drives but did almost result in it getting stuck in the slot-loading SuperDrive on my MacBook Pro, so if you’ve got a machine or a CD/DVD player with a slot loading mechanism, you may want to be careful.
All in all, it’s an album that fans of Al should pick up and that casual listeners will most likely be able to give a pass.

Just So I Don’t Suffer Alone