…To Market, to Market, to buy a Phat Cast.
Apologies for the lack of updates over the past 48 hours. I would have posted this summation last night, but there is a shocking lack of WiFi hotspots and/or network drops in hospital emergency rooms.
Let me explain. Our outting to Tejas went near-flawlessly this year, but since this was a Stewart affair, I obviously had some bad mamma jamma Mojo just waiting to be released, and released it was.
We left Dallas on Sunday afternoon, taking a flight out of the new Terminal D. It’s quite impressive, as these things go; very “Oughties” in its design – airy, spacious, multi-tiered, many windows and skylights positioned to allow just the right amount of sunlight in, T-Mobile WiFi Hotspots as far as the eye can see, etc. American Airlines, as a cost-cutting measure, has instituted self-checkin for all domestic flights, which is actually a very good idea. It seems to cut down on overall wait times and allowed us to check in very quickly both in Philly and in Dallas. Hoorah, American! Once aloft, we were informed that there was rough weather awaiting us at Philly, the ambient temperature was 30° less than in Dallas and that, if we mongoloid cattle classers wanted to eat anything, we’d have to pony up $3 for a “snack box”. Boo, American! On the glidepath in to PHL, we hit a bit of turbulence wihle flying through some rain. Now, I’ve flown a good 20-25 times, but I still have trouble restraining myself at moments like that, when every fiber of my instinctive self is screaming “You’re all lunatics to trust those wings to stay on! We’re all going to die! We’re all going to DIE! DO YOU HEAR ME?” Fortunately, my rational self has thus far been able to club my instinctual self into submission, leaving it a gibbering mess of neuroses huddled in a dark corner of my skull. But boy, if ever I lose control, well, y’all might just be seeing my story under the “Amusing” tag on Fark, I tell you whut.
Since we’d been flying all day with an infant, my parents (who picked us up from the airport) agreed to let us stay the night so that we wouldn’t have to drive home tired, which was a nice gesture in theory, but when combined with an infant who had slept the entire day due to overstimulation, resulted in very little actual sleep. I’m going to go ahead and blame said lack of sleep for what happened next.
I was carrying Will downstairs to breakfast when the combination of partially missing the second-to-last step, Will’s extra weight and my tiredness conspired to send me sprawling to the floor, directly on my knees. I instinctually cradled Will, meaning that my heels, knees and elbows bore the full brunt of my tumbling form. He began to cry but fortunately was completely unhurt. I wish I could say the same for myself – my knees have been popping like crazy and have developed some rather attractive bruises. I don’t think anything was permanently damaged, but it’s still aggravating. If only it weren’t the worst of it.
On the way out of my parents’ house, my wife was carrying Will in his baby carrier and slipped and fell. She turned her foot oddly in a successful attempt to prevent Will from hitting anything, but in the process hurt her foot. After a brief rest and some elevation at my parents’ (RICE, y’all), we headed for the emergency room. We sat in a waiting room for around 1.5 hours and then were taken into a second waiting room devoted entirely to joint injury patients awaiting X-Rays. An attendant eventually came for her and, after a series of X-Rays and another couple of hours’ wait, the attending physician came in to tell us that my wife had broken her 2nd, 3rd and 4th metatarsals in her right foot. She’s doing okay, but unsure and more than a little worried about caring for a 2-month-old child witha broken foot. We’re going to the orthopaedist’s office tomorrow for a cast and an examination to determine whether she’ll need surgery. Excellent.
Man, if things keep escalating like this, my Mojo is going to get someone killed… 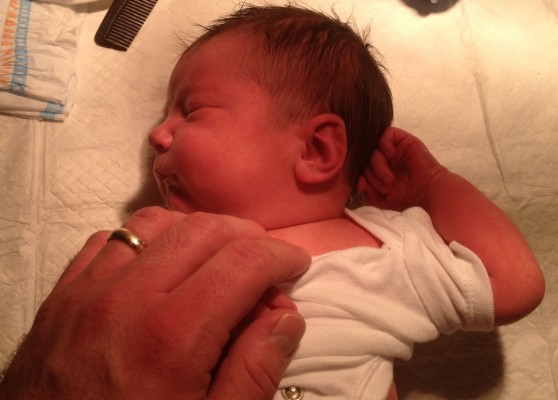