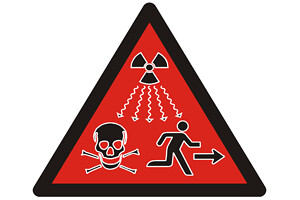 So Aron stumbled across the newly-proposed “don’t come near else you’re risking a severe dose of radiation, and not the cool ‘turns-you-into-the-Hulk-slash-Fantastic-Four-kind” signs created by the IAEA (Official Motto: “No time to search for Iranian nukes, we’re making signs!”) and decided to post it to the “Stick Figures In Peril” Flickr group (a source of much mirth in and of itself, mind you). An enterprising Flickr user decided to alter the sign for Japanese consumption and the following is what resulted:

I must admit I actually snorted out loud upon seeing that version. I agree with the other Flickr commenters as well: a T-shirt simply must be in the offing.